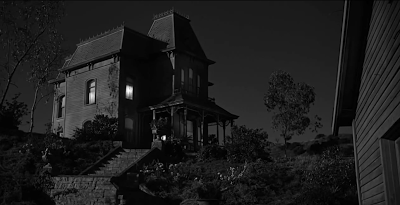 (...) the architectural locale of the two murders is by no means neutral; the first takes place in a motel which epitomizes anonymous American modernity, whereas the second takes place in a Gothic house which epitomizes the American tradition. (...) This opposition (whose visual correlative is the contrast between the horizontal - the lines of the motel - and the vertical - the lines of the house) not only introduces into Psycho an unexpected historical tension between tradition and modernity; it simultaneously enables us to locate spatially the figure of Norman Bates, his notorious psychotic split, by conceiving his figure as a kind of impossible 'mediator' between tradition and modernity, condemned to circulate endlessly between the two locales. (...) It is on account of this split that Psycho is still a 'modernist' film: in post-modernism, the dialectical tension between history and present is lost (in a postmodern Psycho, the motel itself would be rebuilt as an imitation of old family houses).

Slavoj Žižek, 'In His Bold Gaze My Ruin is Writ Large', in Everything You Always Wanted to Know about Lacan (But Were Afraid to Ask Hitchcock), NY/London, Verso Books, 1992, pp. 231-232 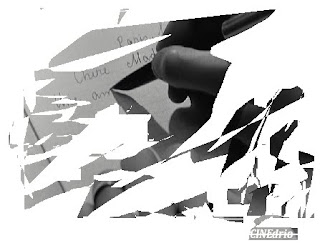